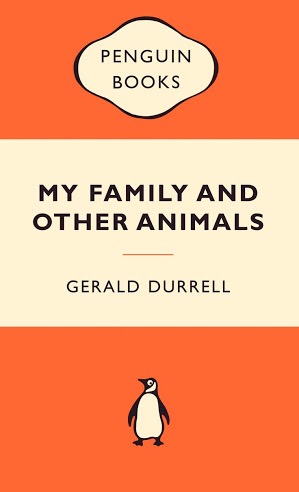 When the unconventional Durrell family can no longer endure the damp, gray English climate, they do what any sensible family would do: sell their house and relocate to the sunny Greek isle of Corfu. My Family and Other Animals was intended to embrace the natural history of the island but ended up as a delightful account of Durrell’s family’s experiences, from the many eccentric hangers-on to the ceaseless procession of puppies, toads, scorpions, geckoes, ladybugs, glowworms, octopuses, bats, and butterflies into their home.

In a word: charming. In two: charming, delightful. This will be my new go to for when readers at my bookstore ask for a happy, easy read. A memoir-cum-natural-history-diary that reads like a comedic, absurdist novel (think Cold Comfort Farm by Stella Gibbons).

Depsite being so young at the time of the events described, Durrell is quite capable of plunging his reader into the world of mid-century Corfu. His depictions of the natural world of the island are so evocative you feel like you’re getting an animal’s or insect’s perspective of a world overflowing with all sorts of delightful flora and fauna. This will definitely appeal to animal and nature lovers as 10 year old Durrell constantly anthropomorphizes the creatures around him – the family pets (some of which are conveniently listed in the Goodreads description) are just as much characters as Durrell’s siblings.

And believe me, his siblings are characters. Look at this description of Durrell’s oldest brother Larry:

If any member of the family had a problem, Larry knew the best way to solve it; if anyone boasted of an achievement, Larry could never see what the fuss was about – the thing was perfectly easy to do, providing one used one’s brain. It was due to this attitude of pomposity that he set the villa on fire. (Page 186)

I’m usually quite critical of those looking for a bright, easy summer read (don’t they know the best books are the tragic ones?!) but Durrell’s voice is so light-hearted and the world he inhabits is so evocative its hard to think of a criticism for this one. Recommended.